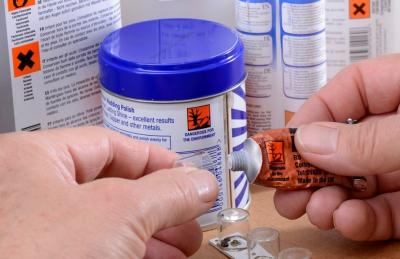 The LED Lighting industry has come a long way in the last 10 years. And the LEDs themselves have got better and better – or have they? One of the less well publicised and indeed less savoury aspects of lighting class LEDs is their ‘incompatibility’ with an increasingly wide range of chemicals.

If you’re not aware of this you should be!

Generally the problem is this – silicones, a family of materials used to form the primary lens or encapsulant of lighting class LEDs, can under conditions of energetic, short wavelength light and high temperature react with certain volatile organic compounds that are in close proximity to the LED. The end result is darkening of the silicone which typically results in a reduction in light emission and colour change.

Silicones are ideal in many respects for the production of LED components; as they can be engineered to exhibit certain properties that are advantageous both to the manufacture and in-service performance of LED components. Likewise, materials that contain volatile organic compounds, such as adhesives, sealants, solvents and conformal coatings, are fundamental to the realisation of the product. The presence of such materials may not even be known to you!

So what can be done?  Well several things.  Firstly, most major LED manufacturers compile white lists and black lists of known good/bad chemicals that have been tested with their products. But these lists are not exhaustive so the next line of defence is through thorough testing prior to volume manufacture.  Thankfully most chemical incompatibility shows itself within a relatively short time period – days or weeks rather than months or years. So duly diligent trials will reveal any problems.  But should problems still occur you will have to resort so some basic elimination-style forensic detective work to trace the cause.