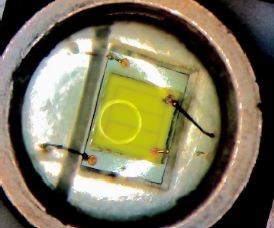 LED lighting is incredibly robust and reliable. However, the performance of LEDs can be reduced and even fail if the LED module is used incorrectly: overdriven or the application environment is too hot, and the unit has not been designed to be fit for purpose. Here’s an overview of the main causes of electrical overstress.

What does this mean?

“Hot Connecting” means connecting a circuit comprising one or more bare LEDs to a LED Driver or LED Power Supply that is already powered-up or ‘live’.

What damage might it cause?
Hot Connecting can result in a short but potentially harmful impulse of electrical energy being discharged from the live LED Driver or LED Power Supply into the LEDs.  This in turn can result in either immediate damage to LEDs in terms of open-circuits or short-circuits, or latent damage that results in similar LED failure after a potentially long period of time (possibly up to many months).

This kind of LED damage is often categorised under the term Electrical Overstress (EOS).

What might be the tell-tale signs to look out for if a unit is returned?
High power LEDs that have suffered from failure due to Hot Connect EOS often show no naked-eye/visible signs of damage, but are frequently electrical short-circuits.  Consequently they emit no light or only a very small amount of light and if they are connected in a series string the remaining/undamaged LEDs remain lit.

What damage might it cause?
If LEDs are connected directly to the UK 230V AC mains supply without any current limiting LED Driver or LED Power Supply they will most likely immediately and catastrophically fail open-circuit, possibly breaking apart explosively in the process.
If LEDs are powered via a LED Driver or LED Power Supply that supplies incorrect current and/or incorrect voltage several outcomes are possible.  If the current and/or voltage is too low the LEDs will appear too dim, or fail to light at all.  If the current and/or voltage is too high the LEDs could either age prematurely (in the case of minor overdrive) or fail catastrophically (in the case of major overdrive) with all scenarios in between being possible.

What might be the tell-tale signs to look out for if a unit is returned?
LEDs that have failed catastrophically due to direct mains connection will typically exhibit severe physical damage including breakage and burn marks.  However, damage resulting from incorrect drive current and/or voltage may be manifest in many ways ranging from dimly lit but normal-looking LEDs through to severe physical damage.

Installation in an environment that gets too hot

What do we mean?
LEDs do not emit the same amount of light of the same colour eternally!  The amount of light reduces exponentially and the colour of white LEDs tends to become bluer – both as a function of time and temperature.  The hotter the environment the shorter the LED life.

What damage might it cause?
LEDs installed in an environment that is too hot will emit less light than intended and degrade more rapidly than intended both in terms of reduced light output and colour change.  In extreme cases, physical damage can occur.

What might be the tell-tale signs to look out for if a unit is returned?
Minor LED overheat that results in premature light output/colour degradation may have no physical signs other than the reduction in brightness and colour change.  Major overheat, however, can result in visible off-state discolouration and physical heat damage to the LED and surrounding components.

What damage might it cause?
If LEDs are reverse-connected to a sufficiently low voltage supply it is possible that they will simply conduct no current, emit no light and suffer no damage.  In such cases correcting the polarity will result in correct LED operation with no adverse effects.  However, if the supply voltage is sufficiently high then immediate and catastrophic damage can be caused resulting in no light emission and typically open-circuit failure.

What might be the tell-tale signs to look out for if a unit is returned?
Incorrect polarity connection that has caused LED failure will typically result in no light emission and open-circuit LEDs.  This could result in signatures ranging from no naked-eye/visible signs of damage to physical damage including signs of burn/overheat.
We always consider effective thermal management, optical and electrical design, and can talk through options on adding protection circuits to protect against incorrect use or “hot-plugging”.